In January 2021 Joe Biden took office as President of the United States on his promise that a Democratic government would bring a rapid climate response. One month later, the US re-joined the Paris Agreement and vowed to ‘take the lead on climate action’. Putting pen to paper, Biden set the goal of reducing US emissions to 50-52% below 2005 levels by 2030.

Despite this huge commitment, CO2 emissions in the US rose by +6% YoY in 2021. After the Build Back Better Bill failed to garner support in the senate despite lengthy negotiations to reconfigure aspects of the Bill, promises had been made but still no action had been taken.

Throughout this year, energy security became an increasing concern with the Russian invasion of Ukraine and subsequent commitments to reduce reliance on Russian exports. By March, WTI crude oil prices climbed 65% from the beginning of the year and neared record highs.

On August 16th 2022 the Inflation Reduction Act was signed into law. The Bill contained key aspects of the original Build Back Better framework that were never passed, especially regarding clean energy transition and increasing domestic manufacturing.

The Act will allocate $370 billion towards climate change and the energy transition. The investment aims to increase domestic production of wind turbines, solar panels, batteries and other energy production and storage means including green hydrogen, nuclear and carbon capture. Funding for the Act will be achieved from a 15% minimum tax on corporations with >$1bn in revenues, Internal Revenue Service (IRS) tax reform and a 1% buyback tax.

Impact on Emissions and Investment

“The Inflation Reduction Act will drive $3.5 trillion in cumulative capital investment in new American energy supply infrastructure over the next decade” – (REPEAT project)

The Act will increase domestic manufacturing and provide much needed support to accelerate the adoption of decarbonisation technologies that are on the cusp of being commercially viable. Princeton’s University’s REPEAT project has modelled the climate and energy impacts of the Inflation Reduction Act using the Energy Information Administration’s (EIA) Annual Energy Outlook scenario as their base assumption.

The study found that the Act will impact three key areas; energy costs, oil and gas prices and emissions. Most importantly the Act could close ~2/3 of the remaining gap between current climate policy and the 2030 emissions reduction target. Driving down the cost of clean tech solutions will make it easier for the public and private sector to close the remaining 0.5 billion ton CO2 gap. 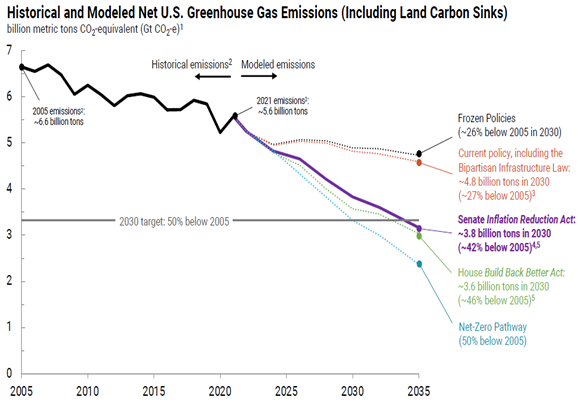 “Under the Act, annual investment in hydrogen production (including electrolysis and methane reforming w/carbon capture) is estimated to increase to $3 billion annually by 2030, triple levels under current policy, and rises to over $50 billion by 2035” – (REPEAT Project)

One of the largest beneficiaries from the Inflation Reduction Act will be clean Hydrogen due to the sheer size of the grey hydrogen market which represents a ~$195 billion replacement opportunity as valued in 2021. Unsubsidized green hydrogen production costs in the US today are $2.60-3.75/kg and will reach $1.91-2.82/kg by 2025 and $1.44-2.25/kg by 2030, at best-in-class renewable sites before accounting for transportation related costs.

The Act provides a new annual PTC for ‘qualified clean hydrogen’ produced and sold or used after 2022 and would apply for 10 years. The act defines qualified clean hydrogen as hydrogen produced through a process that results in a lifecycle greenhouse gas emission rate of <0.45 kg of CO2 emissions per kg of hydrogen. The PTC will work on a sliding scale with 100% granted to those who meet or exceed the criteria. The Act also includes an Investment Tax Credit (ITC) for 30% which will be applicable to facilities beginning construction before 2030.

Bloom is directly positioned to benefit from the energy transition and subsequent investment in energy reliability. Bloom manufactures stationary fuel cells that are predominantly used in micro-grid and primary power applications using proprietary and fuel agnostic solid oxide technology. This allows customers the optionality to convert fuels such as natural gas, biogas, hydrogen or a blended fuel into electricity without relying on combustion. The energy Bloom servers create can be connected to the customer’s electrical supply to avoid disruptions and inefficiencies caused by the highly unreliable centralized grid.

Bloom will be able to participate in many facets of the Inflation Reduction Act in a material way:

Most importantly, the Inflation Reduction Act will support the build out of hydrogen production and infrastructure which will increase the availability of the molecule and in turn increase demand for Blooms servers. Bloom estimates that it has an 80% share of installed stationary fuel cells in both the US and South Korea with limited exposure to Europe at this stage. The business will grow both domestically and internationally as micro grid power applications become an increasingly common solution to energy insecurity and an aging and unstable grid. The company is growing at a topline CAGR of 28% and reported an $8.5bn backlog in 2022 which is almost twice the size of its current market cap.

The Hydrogen industry will prosper under the Biden Administrations Inflation Reduction Act. Companies such as Bloom Energy that are aiding the energy transition especially in Hydrogen, renewables and carbon capture will benefit most directly. Ultimately, the Act will go a long way to helping the US reach their 2030 emissions target by subsidising the mix shift within US power generation towards zero carbon means.

Morgan Stanley Research: The IRA Is a Big Deal for US Clean Tech; Increasing Growth and Price Targets (19th August 2022).