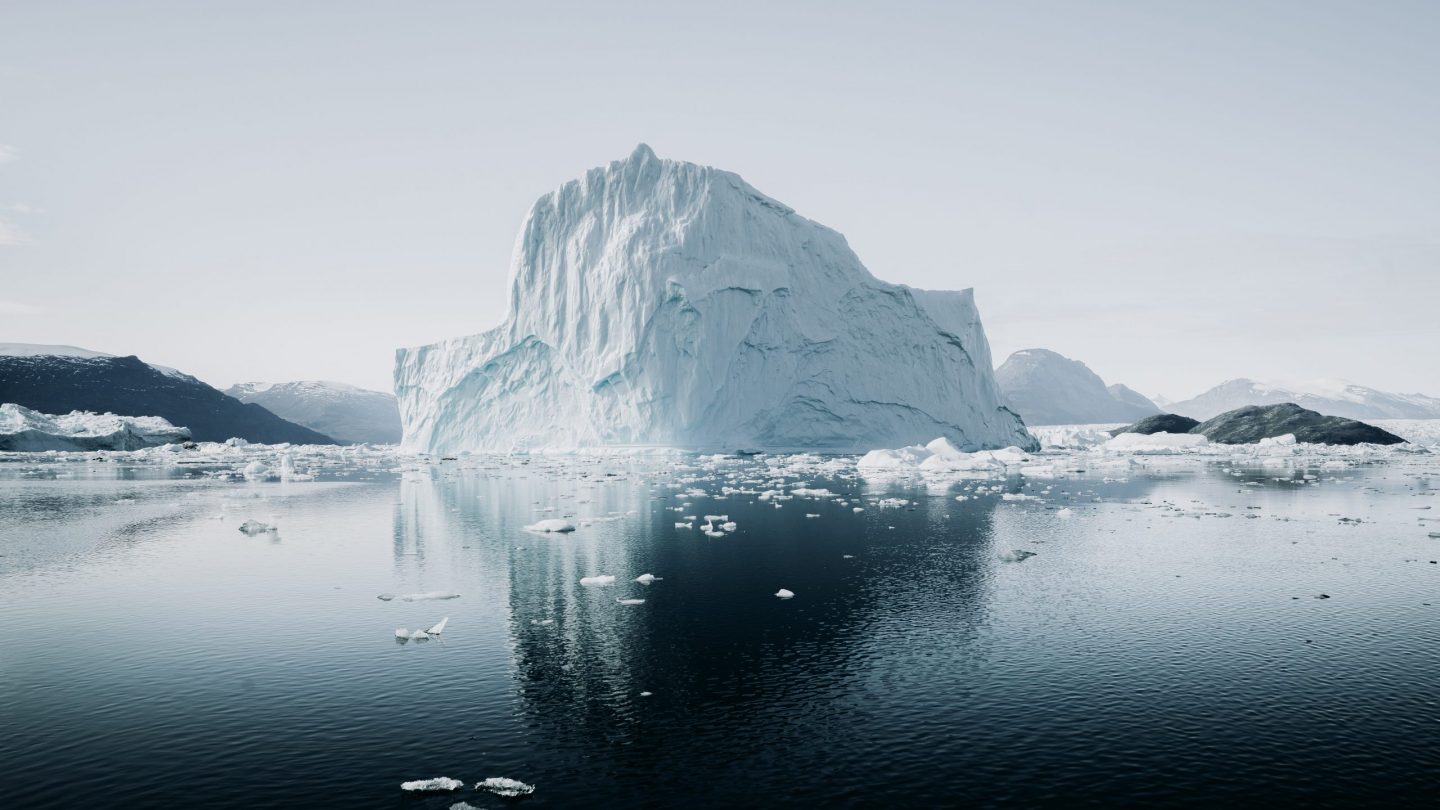 The Road to Net Zero

The Road to Net Zero

Similar to the popular Ben Graham quote “in the short run, the market is a voting machine but in the longer run, it is a weighing machine”, weather can vary day to day, week to week, while over the long term the averages of these observations gives us a good picture of what is going on in our climate.  We believe there is strong evidence that it is clearly changing and impacting our ecosystems.

Fun fact – there are two ice sheets on Earth today that cover most of Greenland and Antarctica which together, contain more than 99% of the freshwater ice on Earth and cover roughly the same area as the United States and Mexico combined. 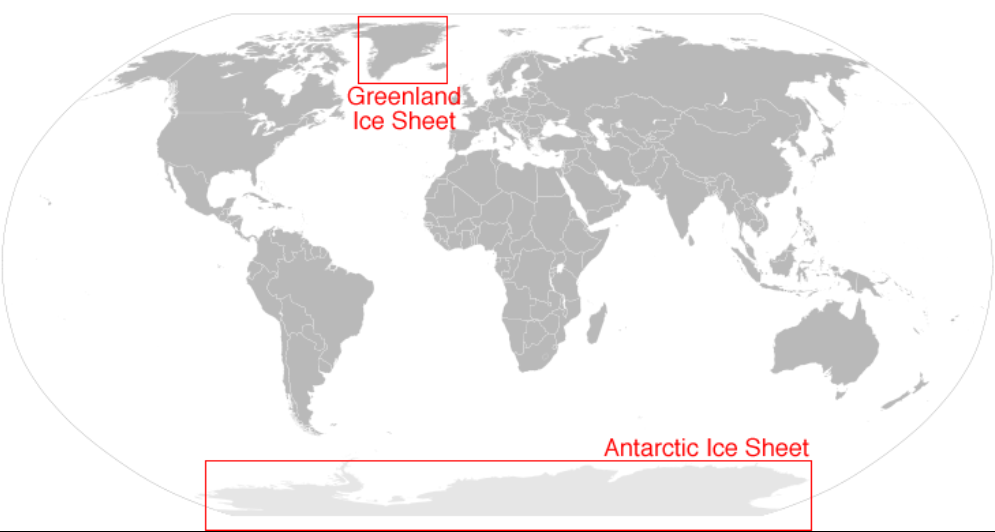 However, we recently came across a headline none of us wanted to see – “Lowest July Antarctic sea ice on record”, which is a prime example of what is going on in our climate, and that is one of increasing global temperatures.

There is no doubt that some of these shifts in our climate are based on long term natural cycles, however studies are providing strong evidence that as we industrialised our global economies over the past couple hundred years (aka Industrial Revolution), human activity has been the main driver of changes in our climate since the pre industrial era.

Researchers have observed that increases in greenhouse gas (GHG) concentrations were unequivocally caused by human activities and that each of the last four decades has been successively warmer than any decade that preceded it since 1850 – seems to be accelerating on itself. 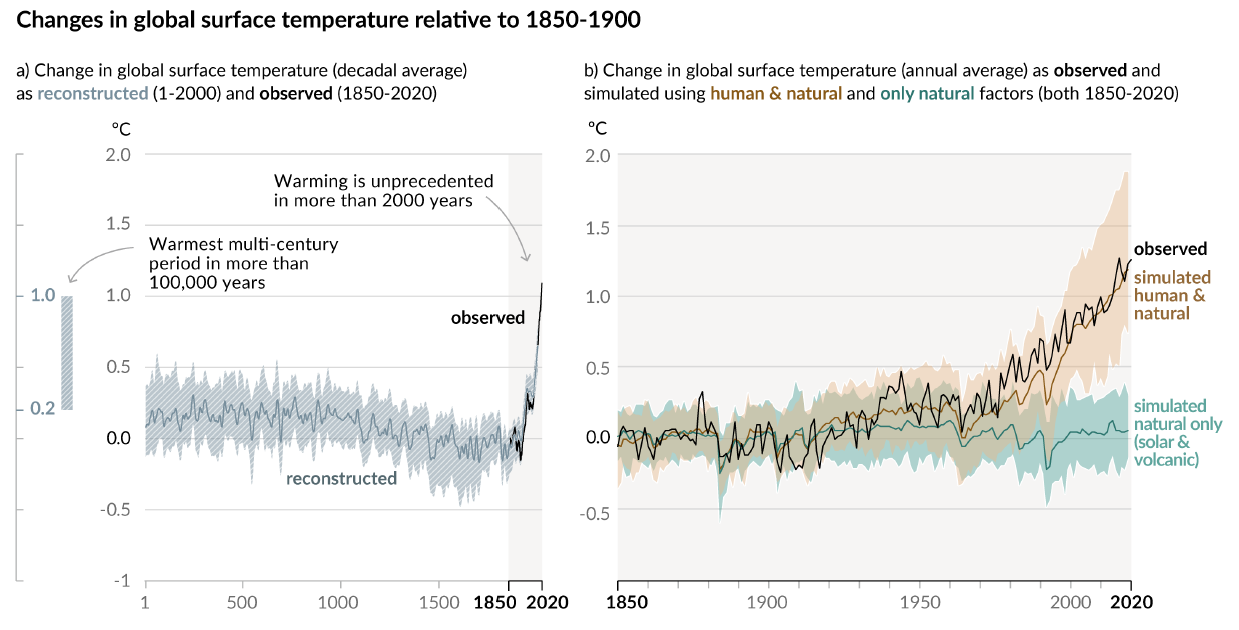 The research also concluded that it was very likely that human influence has contributed to the observed surface melting of the Greenland Ice Sheet over the past two decades although less so for the Antarctic ice sheet.

Human induced warming added about 1˚C to pre-industrial global temperature levels by 2017 (expected to add a further 0.2˚C per decade) with most land regions experiencing greater warming than the global average while most ocean regions are warming at a slower rate.

Scientist consensus has given us a target to shoot for, that is not to exceed 1.5˚C above pre-industrial levels as this is considered the upper limit to avoid the worst of the climate change fallout. Right now however the current path of carbon dioxide emissions puts us on a path to +3.7-4.8˚C by the end of the century – this is not something to leave to the next generation.

As the world warms, it seems pretty clear that the consequences will include greater fluctuations and severity of weather events such as heatwaves (droughts, bushfires) and flooding. This will affect our health, safety, food production etc.

Thankfully there is global participation in addressing the climate issue. The Paris Agreement, which was drawn up in 2015, marked the initial shift towards a net-zero emissions world which is paramount in keeping our global temperatures in check.  It currently includes 190 countries plus the European Union in supporting its doctrine of committing to reduce GHG emissions to limit global temperature rises to 1.5˚C above pre-industrial levels while looking to strengthen these commitments over time.

The International Energy Agency (IEA) has released a comprehensive report (224 pages!) titled “Net Zero by 2050, A Roadmap for the Global Energy Sector”.  The report focuses on the impact of climate change, what will happen if we do nothing and what can be done to mitigate this real risk to our ecosystem; primarily an unprecedented push to clean energy technology away from our dependence on fossil fuels.

We won’t go into them all here however these are some of the key priorities to get to net-zero by 2050:

Make the 2020’s the decade of massive clean energy expansion as all of the required technologies already exist while government mandates and standards are required to target investment and consumer adoption of the most efficient technologies. “Governments must lead the planning and incentivising of the massive infrastructure investment, including in smart transmission and distribution grids.”

Prepare for the next phase of the transition by boosting innovation into areas such as electrification, hydrogen, bioenergy and carbon capture.  Support is needed to accelerate demonstration projects to boost overall development and therefore move down the cost curve.  “Developing and deploying these technologies would create major new industries, as well as commercial and employment opportunities.”

Set near-term milestones to get on track for long-term targets which will help create the certainty required for the enormous capital requirements associated with a net-zero world.  Enabling infrastructure and technologies will be critical in helping us reduce emissions to achieve the 1.5˚C limit.

The graphic below highlights the IEA’s anticipated pathway over the coming decades and you will note that electrification of vehicles, energy efficient buildings and renewable energy naturally become more paramount over the coming years in achieving these goals. 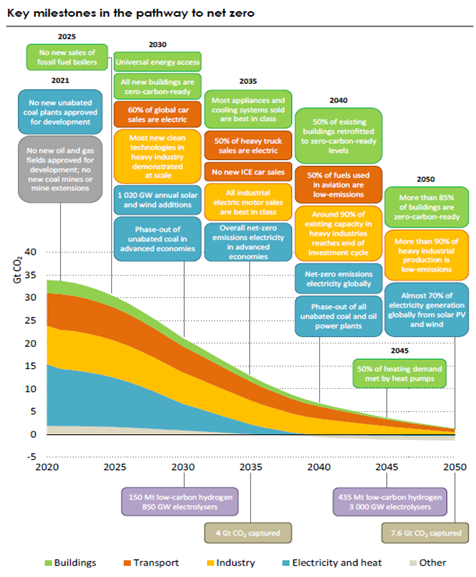 We understand that doing the right thing does come at a price, however the longer term economic and societal benefits will deliver significant dividends to us all.

The IEA estimates that the investment in clean energy and energy infrastructure will total close to US$5tr annually by 2030 and this will create significant multiplier benefits to jobs across many industries while also contributing significantly to global economic growth.

The Ellerston Global Mid Small Cap Fund is participating in this mega trend.  Not by trying to pick which technology or platform will win, rather by providing the clean energy enablers to the sector.

We highlight a few here:

Sensata Technologies provides mission critical high voltage sensors in cars (such as Tesla) and increasingly charging stations.  Sensata estimates that its content per electric vehicle has the potential to be double that of standard internal combustion cars.

Flex owns the world’s largest solar tracking business in Nextracker.  Commercial solar fields will be paramount in a net-zero world and Nextracker helps them operate much more efficiently.

Bureau Veritas is one of the world’s largest testing, inspection and certification companies involved in ensuring next generation technologies such as electric vehicles/charging stations and hydrogen meet and maintain appropriate safety standards.

Chart Industries is a global leader in providing technology, equipment and services related to liquefied natural gas, hydrogen, biogas and carbon capture applications.  Chart has leading market share in core hydrogen storage and transportation equipment in the US and Europe with approximately 60% and 40% market share respectively.

We are constantly building our knowledge in this multiyear investing opportunity and will look to provide equity capital to businesses operating in this global megatrend.  This could prove to be one of the most powerful investment themes we will see as investors for some time while undoubtedly THE most important directive to build on for us all as a human race.